As we move through everyday life, we drag around a lot of baggage that is a direct result of being hurt. We are hurt by tragic experiences like the death of a loved one or the loss of a job or the ending of marriage. We are brutally hurt by circumstances that can’t be controlled. We are damaged by one sudden tragic event or a series of them. Those hurts build up over time. Stabbed in the back by someone you trusted, a relationship that ends badly, someone leaves you out of contact when you needed them most. The just keep coming one after another.

Forgiveness? I’m just supposed to let them go, with no accountability as to the pain they cause? What about my feelings? Do you expect me to trust that supposed friend again after they violated a confidence? Those that you once looked up to with great respect start rumors about you, whispering, laughing or that you even hear making the most hurtful comments when they thought your weren’t around? Just didn’t happen, huh? Those that used you for their benefit, but worse than that, at your direct expense? They get to just move up while I move down and that is just right? What a bullshit concept, says angry middle aged me.

Turns out, I didn’t understand what forgiveness was.

One night a couple of weeks or so ago, I starting working on a new workbook as a part of my therapy. In fact, I had just ordered 2 new workbooks and I usually alternate back and forth between them on my Kindle and picked one to start. Although not the subject of the workbook, the first chapter was on forgiveness. Well, I wasn’t feeling much in a forgiving mood on this particular evening, (ok, so I was pissy, so not the point of this post!!!!!!) so I closed out of that one and opened the other. Completely different subject. First chapter is on forgiveness. Hmm. What a coincidence. Off across the internet we go looking for the connection. It turns out, it is all linked together and I kept reading more and more, page after page, but I am still not grasping the concept. I see what they are all saying, I am just not grasping it. Until I read a definition of forgiveness that changed my understanding by changing my perspective.

All of the definitions I saw were along the lines of “to stop feeling angry at someone who has done something wrong.” Oh boy, my favorite thing some people say. “Just stop doing/feeling” whatever kind of way, like it was just that simple. Still mad that my entire mental health team never thought to have me to just stop something to make it all better.

What about my fear of trusting again? What about my pain?
Riding down the road coming back from Edisto a couple of weeks ago, Melissa and I were listening to a podcast and the host was making a point about something and said “anger is nothing more than the expression of fear and pain under pressure. Remove any one of the three and you don’t get that emotion.” Melissa and I just looked at each other. A little throw away line in the middle of a larger point, in fact there was never another reference to the line for the rest of the show, that spoke to both of us at the same time. What an incredible definition of anger, especially since that either my default state, or my first emotion.

And then the workbook quote came. The first definition that was different than the superficial one of “just stopping being angry.” This one finally said something that made sense to me. “Forgiveness is the process where we learn to stop blaming others for our reaction to their actions.” Stop blaming others. STOP BLAMING OTHERS. Then it clicked, then it all made sense and has become that I spent most of my time over the weekend thinking about and working through those exercises in the workbook and from the perspective of looking at what I blamed other people for and that became the key. I was giving them power over me.

Now don’t misunderstand me, forgiveness is not about forgetting the actions of others. I will never forget the actions and deeds of some people. I will simply remove them from that portion of or all of my life. There are people that I will never share things with, thinking that will treat that information, or me for that matter, with any respect. I won’t continue to give to people who continually take from me and then criticize me at the same time. I can never forget the words said to me by supposed leaders and men of character. Their actions have caused me to reexamine those hurts in a new light as I continued to learn about my reactions.

In fact, there is a tremendous amount to be learned from the hurt that they caused and I am now thankful for their actions and the valuable lessons that were learned. I am grateful for what they have done individually and cumulatively and where it exposed my flaws. Appreciative for contributing to getting me to a place where I had to learn that there is a difference between being mad and being angry. The way I now see it, being mad is an emotion, being angry is a state of being. And emotions have to be dealt with and processed.

We can’t ignore the processing of all of our emotions. There are no wrong emotions, only poor responses or ignoring those emotions. Emotions are real and an explainable physiological response in our body. For example, fear is the body being uncertain in a situation it perceives as dangerous and is preparing your body’s fight, flight or freeze response. Even when that fear is internal to only our own minds. As we say at our house now, any statement that starts with “I feel” is not WRONG no matter how much you disagree.

By acknowledging our emotions, by looking at why someone or a situation made you feel the way it did, you can address those emotions in an ongoing and mentally healthy way. To work through those fears and to deal with your pain is the whole point of all of this. Remove the pressure of bottling up your emotions and that pressure building that results in resentment and anger until you are no longer able feel anything other than anger and wanting desperately to inflict that anger on anyone, and it usually winds up being those that are closest. Remember Anger is fear and pain under pressure, so remove the pressure.

However, the greatest thing that I have learned through this process, is how to forgive myself. How to let go of those constant thoughts that I am unworthy, that I don’t have any use except what I can be to others, for letting the anger boil to a point where it has impact my physical health. At the very next opportunity to do so, to pause when I feel an overwhelming emotion and process why I felt the way I did. To quit finding the one little mistake among all of the good. To harp on the losses and not enjoying the wins.

I am worth my every effort.

Over the last 2 weeks as I have worked on forgiving myself, I have felt lighter and more free than I can ever remember. My thoughts are clear and rational. Everything has started slowing down and isn’t at the frantic pace it was for the last several months. I can make decisions now that I am confident in whereas when I started my group therapy program, I couldn’t process the simplest of decisions. Not didn’t want to, couldn’t. Paralyzed and frozen at the simplest of questions to me. I am able to be still and quiet, can go hours at a time with no sound at all and no tortuous racing self negative thoughts. I’m no longer scared of me.

I think they call this contentment. It is new and it is weird, and I still have so much work to do, but I’m pretty damned proud of myself. It is all came by a simple change of perspective.

Forgive yourself. You are the only one that can. It is ok. Those negative thoughts are lying to you. You are good enough. You are not unworthy of being loved. You do deserve to be joyful. You have the choice to do what is best for you and not feel any responsibility as to what others think about it. There is immense freedom is forgiving yourself, while forgetting the people who have hurt you in the past. Those that have hurt me have given me a tremendous gift, the ability to learn and grow and try to be my best version of me. And life is a hell of a lot less complicated.

Remember to love yourself first, always. 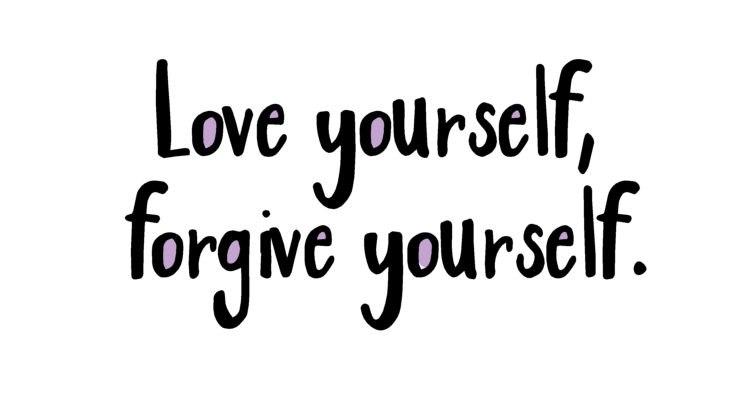 View all posts by coachjablack

3 thoughts on “The Freedom I Found”